While it’s just one preseason game, the start to the 2019-20 season for Ben Simmons, Joel Embiid and the Philadelphia 76ers couldn’t have been more positive. They faced the Guangzhou Long-Lions on Tuesday and came away with a resounding 144-86 win. Of course, the game was a mismatch and it’s just preseason action, but there were still plenty of positives to take away.

The 76ers star has long been criticized for not having much of a jumper – especially from beyond the arc – as he’s never made a three-pointer in an NBA game. That changed on Tuesday as he finally drilled one. 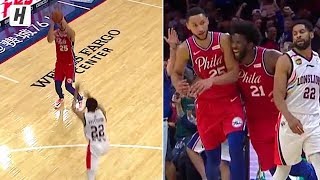 While it was only an exhibition game, it was a significant moment when Simmons pulled up for three at the end of the first half and swished it.

He hadn’t made a three since November 30th, 2015 when he was in college playing for LSU against the College of Charleston.

He had been a combined 0-for-18 on threes as a pro. Hopefully we’ll see Ben Simmons jumper develop and carry over into the regular season as becoming a threat from the outside (with his shooting) would be a huge boost to the team.

Joel Embiid has reportedly lost about 20-25 pounds and if our first look is any indication, the first impression is that he was very crisp. Again, consider the opposition, but Embiid had 17 points, three rebounds and an assist in 14 minutes of action. He completely abused Andrew Nicholson and looked like he could have dropped 50 on him if he wanted to. He finished the night four-of-seven from the field while going nine-of-nine from the charity stripe.

He didn’t even play the second half, which is what the coaching staff planned all along. The goal is for him to play 70+ games this season, which is something he’s yet to do in his NBA career. He played 64 games last season, 63 in 2017-18 and 31 in 2016-17. They plan to manage his playing minutes, practice minutes and back-to-back situations to get him to that number.

76ers are +700 To Win The NBA Championship at DraftKings