It feels like the Philadelphia Eagles have gotten off the mat a little bit. They started the year with a win but then lost three in a row, and were trailing by double-digits in Carolina last week. Another loss would have put their season in jeopardy – even though it’s still pretty early. Nonetheless, they rallied and came back to win the game, and are now at 2-3. That looks a lot better than 1-4.

The Eagles now have a tall order in front of them on Thursday Night Football as the Tampa Bay Buccaneers visit. A win over the Bucs and the Eagles season is right back on track. Can the Eagles pick up the win or at least get a cover? Let’s take a closer look at the best odds boosts and props on the board.

Tom Brady To Throw For 300+ Yards, Leonard Fournette To Score 1+ Touchdowns & Buccaneers To Win By 7+ Points

Fournette & Miles Sanders Both To Rush For 50+ Yards

Fournette, Sanders And Kenneth Gainwell To All Rush For 25+ Yards 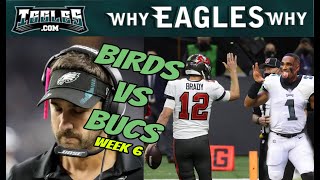 While he continues to fly under the radar, Antonio Brown has become a big piece of this Tampa Bay offense. He has 20 catches on the year for 325 yards and three touchdowns, and his 16.3 yards-per-catch average is 15th in the NFL.

Brown has registered exactly seven catches in each of the last two weeks, totaling 18 targets in that span. He had 124 receiving yards last week and 63 the week before. His arrow appears to be pointed up – especially with Rob Gronkowski out another week. Look for Brown to continue to light it up against a weak Eagles secondary.

Eagles quarterback Jalen Hurts has been airing it out this season and there are two main reasons for it: the Eagles ground game hasn’t really been there for support and the Eagles have been trailing quite frequently. Those could be problems again tonight as the Eagles are going up against the No. 1 run defense in the NFL. Tampa Bay allows 2.9 yards-per-carry and has allowed a league-low 45.8 rushing yards per game. All of that leads to a setup where Hurts is likely to be passing quite a bit. He has thrown it at least 37 times in three straight weeks; a fourth should be in sight tonight.

With Hurts hurling the ball plenty tonight, DeVonta Smith should be one of the biggest beneficiaries. Remember, the Bucs secondary is also banged up, so Smith should have ample opportunities to pile up the yards. We’re looking at a high-scoring affair where the Eagles probably won’t be able to run the ball very well and could be trailing. That should equal yards for Smith as well as this over.