NHL Planning To Return In July With 24-Team Playoff Plan

As the COVID-19 pandemic appears to have peaked in the United States, we’re now starting to get some reports as to how the major sports will return. We have two major sports (NBA and NHL) that went on a hiatus right as their regular seasons were winding down and we have one other league which didn’t even get started (MLB).

With the NHL, the big challenge for them has been figuring out how to play out the season while also not interfering with the offseason and the start of the 2020-21 campaign.

On Monday, we finally got some details from NHL Commissioner Gary Bettman as he revealed that puck drop will come in late July or August. In terms of the format, here’s what it will look like. 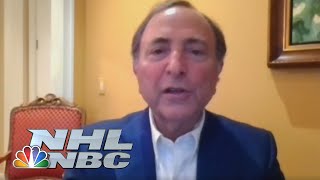 The NHL has announced that they plan to go straight to the postseason upon returning but to have a modified playoff format. Normally, just 16 teams make the playoffs but now we’re going to see 24 teams in the tournament.

There are still eight or nine locations under consideration with Las Vegas expected to be a top choice. Regardless of where the games are played, fans won’t be allowed into the stadiums for now.

In terms of when this all gets underway, the Bettman stated that the earliest the puck-drop would happen is in late July or early August. They are hoping that training camps can start in June but all of the dates are still fluid as of right now.

The playoff seedings and matchups would look like this:

No. 5. Pittsburgh Penguins vs No. 12 Montreal Canadiens

No. 6 Carolina Hurricanes vs No. 11 New York Rangers

No. 7 New York Islanders vs No. 10 Florida Panthers

No. 8 Toronto Maple Leafs vs No. 9 Columbus Blue Jackets

No. 5. Edmonton Oilers vs No. 12 Chicago Blackhawks

No. 6 Nashville Predators vs No. 11 Arizona Coyotes

No. 7 Vancouver Canucks vs No. 10 Minnesota Wild

No. 8 Calgary Flames vs No. 9 Winnipeg Jets

Now that we know the format, we can take a look at the updated Stanley Cup futures. Not all sportsbooks in New Jersey have re-hung the lines as of yet as there is some concern over where the games are played.

However, FanDuel Sportsbook has re-posted the lines and here’s what we’re looking at:

For a full list of the teams, you can visit FanDuel Sportsbook but those are the odds of the teams at 20/1 or shorter. The odds will differ from sportsbook to sportsbook slightly. For example, Caesars actually the Bruins, Lightning, and Avalanche all at +600.

We already have some play-in series prices courtesy of Caesars but they’re one of the few in the Garden State to have these odds up. Here’s what they look like:

The main thing that everyone wants to see right now is where the games will be played.

The Golden Knights were already a popular bet to win the Cup because they have a pretty good team but when you factor in that the games might be played in Las Vegas, that could give them an edge. Everyone else might become de facto road teams.

Speaking of road teams, if you’re handicapping the playoffs – either for the series or to win the Cup – you might want to examine road records to see who fares the best when away. After all, pretty much all of the games will be away games.

Keep in mind that the hiatus has helped teams get healthy, which clearly would have put some teams at a disadvantage otherwise.

For example, Steven Stamkos of the Tampa Bay Lightning has finally recovered from his core muscle surgery. He would have been a question mark in the playoffs had there been no pause.

The Avalanche are likely the biggest beneficiaries as they’re fully healthy now.