One of the keys to being successful in Texas Hold’em Poker is to get a feel for what’s coming next. Whether it’s evaluating what the competition is thinking or estimating what cards are coming up, strong instincts give players an edge. While some players have a good feel for the game, Troy Clogston might be on another level. 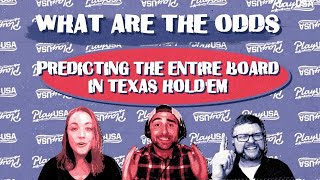 Playing at the Lone Star Poker event, Clogston forecasted an entire hand. He started off with a pair of Jacks and before the flop came, he predicted everything that would turn up.

Clogston is a veteran on the poker tour and has some decent finishes under his belt.

DraftKings Boosts Welcome Offer To $500 For ALL Customers