There’s nothing better than a divided opinion on UFC 260 betting odds to move the betting needle.

DraftKings Sportsbook and FanDuel Sportsbook have Saturday’s rematch from Las Vegas as its second most competitive since the circuit returned last May 9. The fight is bettable from both sides and each fighter has a legitimate path to victory.

Furthermore, these are two popular heavyweights.

First Order of Business. Get the boosts and freebies.

PointsBet has been routinely boosting Miocic betting odds 20-30 basis points over the real line. When he was +120, they had an odds boost to +150. When the line became +100, he went to +120 on the boost. If you like him, keep an eye on that boost. It will at least eliminate the vig.

Ngannou was an eye-opening -175 at the start until the sharps hammered it with a Miocic betting wave.

Ngannou has been the human highlight reel in his last four fights, notching four straight K0/TKO 1 results in less than three minutes combined. He received mystique last May after the 20-second destruction of Jairzinho Rozenstruik. Boxing legend Iron Mike Tyson proclaimed Ngannou a future champ in a high-profile tweet.

That mystique worked its way into this line for the fight’s UFC betting odds.

On the Miocic side, he has the style to beat Ngannou. He prevailed by decision in 2018 and all three of Ngannou’s losses occurred that way.

The public obviously expects something different this time, but what if it’s the same?

FanDuel has a Miocic decision victory at +460. That’s a whopping number for something that’s already happened.

Taking any decision will return +340 under the How Fight Will End section.

Ngannou’s most likely method of victory doesn’t pay that much.

The payouts are so good that this is worth grouping a couple of rounds together.

It’s a smaller payout but covers a good chunk of time. Regarding methods both are not known for, Miocic is +210 for a K0/TK0 and Ngannou is +1400 for a decision.

Submissions? Rare, but Ngannou has four of them and it would pay +3400.  For Miocic, the rare submission returns +2100.

Does endurance become a factor for Miocic if Ngannou has to go into the late rounds?

Performance Oddity: Miocic fought the same opponent three times in a row. That was Daniel Cormier. He was stopped by Cormier, notched a K0/TKO victory and then a decision.

If you expected the Alexander Volkanovski-Brian Ortega co-feature for the featherweight title, it was postponed. Volkanovski tested positive for Covid 19 after arriving here, despite observing all protocols.

Woodley and Luque have been moving in opposite directions. Woodley, a former division champion, has lost three straight, all to ranked fighters. His last was a TKO loss and rib injury to Colby Covington in September.

But he’s been around. Woodley is ranked seventh in the welterweight division.

Luque is ranked 10th and rising.  He is stepping up to his highest level and says he needs a fight like this to reach the top five. If Woodley has become an opponent, this is a great step-up platform for Luque.

If Woodley’s class difference matters, he returns an excellent price.

Most of the women’s bouts since the UFC’s return last May have ended in decisions, but the UFC 260 betting odds and prices here are at least a temptation to think outside the box. 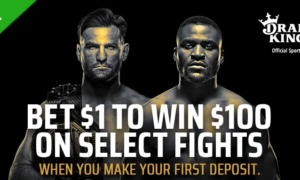