It’s going to be a special UFC card this weekend and not just because we have the Heavyweight Championship belt on the line. DraftKings Sportsbook is offering up a pretty sweet deal for UFC 260 where bettors can wager $1 and win $100 from a variety of fights. Let’s take a closer look at this promotion and explain how you can win.

New customers can get their hands on a pretty generous promo from DraftKings Sportsbook this weekend.

All you have to do is use THIS EXCLUSIVE DRAFTKINGS LINK

Sign up for a new account and bet on one of the selected matchups at UFC 260 matchups.

First-time depositors will have to fund their accounts with at least $5 and then they’ll be able to bet $1 on any of the four fighters mentioned above and if they win their bet, they’ll get a payout of $100. To put that in perspective, you can take Volkanovski from -190 or Ngannou from -135 all the way up to +10000. You can obviously do the same with either underdog.

Only one bet per user is allowed and this has to be placed pre-match. You can’t do any live betting with this boost, any parlays, cash out bets, free bets or anything like that. Also, customers must be located in the states of New Jersey, Colorado, Indiana, Iowa, Illinois, Michigan, Virginia, Tennessee or West Virginia.

One of the most interesting aspects of Saturday’s main event is that the champ – Stipe Miocic – is an underdog on the betting lines. What’s even more bizarre is the man he’s fighting – Francis Ngannou – is someone he’s previously defeated. 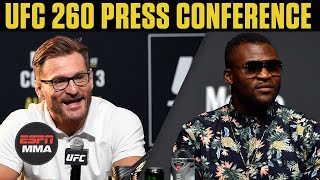 Miocic and Ngannou fought at UFC 220 back in January of 2018 and back then, Miocic felt like he was being underrated. He openly complained that he wasn’t getting enough love from the promoters and support. He used that as a chip on his shoulder and ended up bullying Ngannou for five rounds before winning via unanimous decision. At the time, he broke the record for the most consecutive heavyweight title defenses in a row (with three).

Since then, Miocic has been engaged in a trilogy with Daniel Cormier, which saw the current champ lose the first bout but come back with two impressive wins. He’s now won eight of his last nine fights.

As for Ngannou, he’s likely favored because he’s four years younger than Miocic and has age on his side. Ngannou has won four straight with each of the wins coming via knockout. He’s a knockout machine as each of his last six wins has come via knockout and 10 of his last 11. The concern is what happens if he can’t keep this standing or if his power is neutralized as Miocic did the first time.

We’ll find out on Saturday night amongst a card that’s expected to deliver plenty of fireworks. Best Sportsbook Promotions For 2021 The Masters